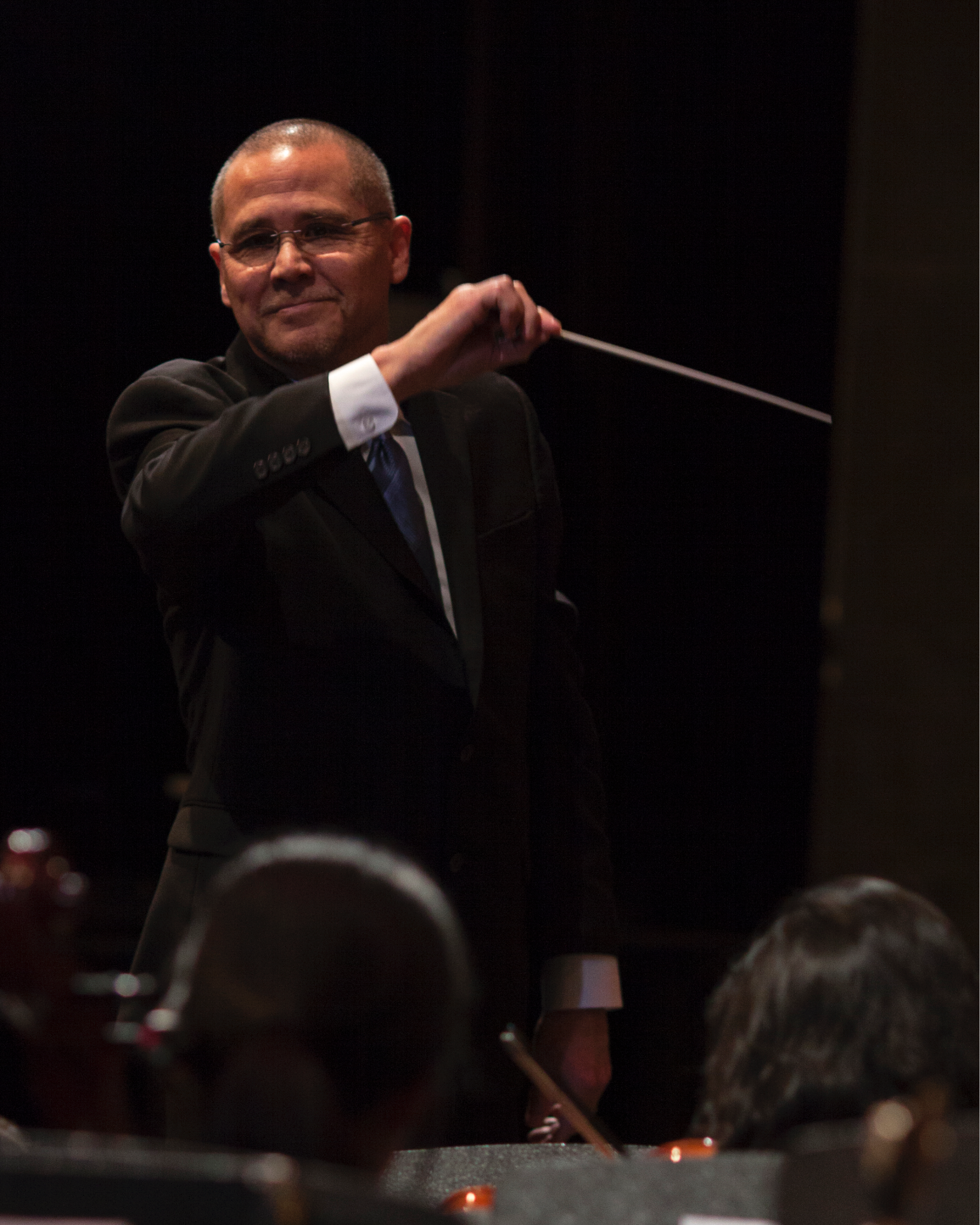 Richard L. Saucedo retired in 2013 as Director of Bands and Performing Arts Department Chairman at the William H. Duke Center for the Performing Arts at Carmel High School in Carmel, Indiana. During his 31-year tenure, Carmel bands received numerous state, regional and national honors in the areas of concert band, jazz band and marching band. Under his direction, Carmel’s Wind Symphony I performed at the Music for All National Concert Band Festival three times (1992, 1999, and 2004) and was named the Indiana State Champion Concert Band most recently in 2013. The group also performed at the Midwest Band and Orchestra Clinic in Chicago during December of 2005. The Carmel Marching Greyhounds finished in the top ten at the Bands of America Grand National Championship for 17 years under Saucedo and were named BOA National Champions in the fall of 2005. Carmel became one of the few schools to win a BOA National Championship and perform at the Midwest Clinic in the same year in 2005. The Marching Band was the Indiana Class A State Champion four times. The Indiana Bandmasters Association named Mr. Saucedo Indiana’s “Bandmaster of the Year” for 1998-99 and he was named the “Outstanding Music Educator” in the state of Indiana for 2010 by the Indiana Music Educators Association. Mr. Saucedo’s accomplishments have been highlighted in articles by HALFTIME and SCHOOL BAND AND ORCHESTRA Magazines. He was inducted into the Music for All “Hall of Fame” in 2015 and recently was inducted into the Drum Corps International “Hall of Fame” (2022).

Mr. Saucedo is a freelance arranger and composer, having released numerous marching band arrangements, choral arrangements, concert band works and orchestral compositions. He is currently on the writing staff at Hal Leonard Publishing. His concert band works have been performed all over the world by middle school and high school bands as well as by college and university groups. Mr. Saucedo’s first orchestral piece, “Nocturne for Orchestra” was named most outstanding new original composition at the National Orchestra Cup Festival, held at Lincoln Center in NY during April of 2009. His most recent work for orchestra, “Essay No.1” was premiered at the Midwest Clinic in 2014 and he is currently working on his 1st Symphony for orchestra. Mr. Saucedo receives numerous commission requests and he will be releasing new works for university, high school and middle school bands throughout the 2020-2021 school year. He is the author of two DVD’s on rehearsing the marching band wind section and he is also featured in two concert band rehearsal technique DVD’s, all available at dynamicmarching.com.

Mr. Saucedo travels the world as an adjudicator, keynote speaker, clinician and guest conductor. He will be a guest conductor, clinician or commission composer in over 25 different states in the U.S. during the 2021-2022 school year. He was an adjudicator and clinician for the Singapore International Band Festival in July of 2014 and served as a clinician and guest conductor at the Japan Band Clinic in Hamamatsu during May of 2016. Mr. Saucedo presented at the Australian Band and Orchestra Clinic (ANBOC) held in Sydney during September of 2016. While in Australia, he was also a guest conductor for the State Honors Ensemble Program (SHEP) at Griffith University in Brisbane. He was a featured clinician at the 2017 Midwest Band and Orchestra Clinic in Chicago, the 2018 Texas Music Educators Association and at numerous state MEA’s and Bandmaster’s conventions. Most recently Mr. Saucedo was a clinician in Amsterdam and Chengdu, China. He will be an adjudicator for the Hong Kong Concert Band Festival in November of 2021. Mr. Saucedo currently judges for Drum Corps International and he was the brass composer and arranger for the Cavaliers Drum and Bugle Corps in Rosemont, Illinois from 2000 through 2008. The Cavaliers won five DCI World Championships during Mr. Saucedo’s tenure. He also spent four years as the brass composer and arranger for the Blue Stars Drum and Bugle Corps in La Crosse, Wisconsin. He is currently the ensemble coordinator for the Blue Devils Drum and Bugle Corps in Concord, California.Mr. Saucedo is an Educational Consultant for “Music for All” and “Bands of America.” He is a member of the Conn-Selmer Division of Education and currently serves as assistant chief judge for Bands of America marching band competitions. He is a former member of the Board of Directors for “United Sound”, an organization whose mission is to give special needs students a chance to experience the joy of instrumental music performance in their school band or orchestra though peer mentoring. Mr. Saucedo also serves on the John Philip Sousa Foundation Sudler Trophy committee, helping to identify and reward the finest marching bands in the world.

Mr. Saucedo did his undergraduate work at Indiana University in Bloomington and finished his master’s degree at Butler University in Indianapolis. He is also an aviation enthusiast and a certified private pilot. Mr. Saucedo is married to his wife Sarah and is most proud of his two children. His daughter, Carmen, is currently teaching in Washington Township (Indianapolis) after studying elementary education at Ball State University. His son, Ethan, is currently in 10th grade and is a percussionist in the Fishers High School (IN) Band Program.